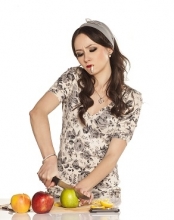 Lilly is the main character of the book "538: Murder, Suicide and A Mother's Love", which was written and self-published by Cheryle Boyle in Atlanta GA. Today Lilly is introducing her daughter and grandson, Nancy and Ian, while they interact with her other daughter, Sadie.

I am Lilly, the main character, and I would like to introduce you my daughter, Nancy, and her oldest son, Ian, as they interact with my youngest daughter, Sadie.

The screen smelled dusty and the window was clean but smudgy, making it hard to see out, but Sadie and Ian stood watching. The noise was incredibly loud and they both held their ears. They were too curious for their own good. Ian had deep auburn-red wavy hair, a vivid contrast to Sadie’s pale blonde straight hair. As they stood together, their vast differences were apparent, hushing away the idea that they were related. Sadie’s half-sister, Nancy, yelled from the kitchen and Sadie turned to look. She was three times Sadie’s age. Sadie enjoyed playing with Nancy’s son, Ian. They seemed to get along well. The oddity of Sadie being Ian’s aunt never entered the children’s minds.

As Nancy walked up to the two children, tea-towel on her shoulder, cigarette dangling from her mouth, and smoke billowing up in the air and disappearing, she scolded, “Stay inside, you two, do not open the door and do not step out! It’s dangerous.” Then she hurried back into the kitchen to tend to the dishes. Ian and Sadie were afraid, but really were not sure why. They watched the men working outside, but nothing seemed so alarming as Nancy had indicated. Stick by stick the men were taking down a huge tree. They climbed higher and higher to reach the branches that would be bothersome when the tree fell. The kids had no idea; they just knew this was something different and scary, but exciting all the same.

Nancy’s husband entered the front door and pushed the children back. Sadie stood wide-eyed as Ian told his father that he wanted to watch more, see better. “Can I please come out? I will stay on the porch.” To Sadie’s dismay, Ian’s father said yes!

Sadie was too afraid to leave the comfort barrier that the door afforded her. It was as if Ian had forgotten everything that his mother had said. As Ian stood on the porch watching, Sadie spoke to him through the screen. They laughed and giggled and covered their ears to the chain saws blaring. The men were yelling back and forth to one another. Ian had wandered off the porch and down the first step where he stood looking up. No one noticed him. They only noticed the lean of the tree.

All of a sudden the tree gave way unexpectedly and rapidly fell, dust and branches flying and a small boy crying as he lay pinned by twigs. The end of the branches had trapped him. Ian’s father ran, Sadie screamed to Nancy. With fast wide steps Nancy flew out the front door, spitting her cigarette to the ground and grabbed her child. He was scratched and held a large gash in his shoulder, splitting his collar bone. Nancy shrieked for someone to please call an ambulance. She turned to Ian’s father and yelled “This is the last time you hurt one of my children or me, you mean, stupid, SOB!” And, she meant it. This fight would not end here, after the returned from the hospital, things heated up with a mixture of gasoline and fire…